March 15, 2022 / Education, Culture and Communication / Community Networks
Threatened by territorial conflicts, the region is one of seven to be part of the international training program that is led by Saúde e Alegria in Brazil
Last Saturday (March 12), the field actions of the School of Community Networks in the Amazon reached the Inanu community, located in the Lago Grande Extractive Settlement Project, in Santarém, western Pará.
Seven representatives from the youth collective Guardians of Good Living came from their communities to receive the School team and participate in the interactive dynamics in Inanu.
The proposed activities were aimed at reflecting on the territory, mapping the collective’s strengths, challenges, and dreams. The process was conducted by Adriane Gama and Priscila Cotta with the support of PSA educommunicators Elis Lucien and Walter Kumaruara.
Based on these face-to-face meetings that will take place by the end of April in the seven communities that are participating, the board of the School of Community Networks of the Amazon will draw the curriculum of the training that takes place from July to December – seven experts and seven leaders of each organization involved are part of the board.

“The school seeks to strengthen community communication initiatives such as community radios, telecenters, public and free internet access points for a better and more efficient use for health, education, and family agriculture. It indicates an accumulation of experiences of PSA, which also proposes an exchange between the institutions that are part of the project in the Amazon” – explains the coordinator of Saúde e Alegria, Paulo Lima. The project is the education pillar of the ‘Connecting the Disconnected’ program, run in five countries by the Association for Progressive Communications (APC).
For the school’s coordinator, Priscila Cotta, it is fundamental to promote an initial immersion in each territory and only then propose content that is in accordance with the students’ needs. “The Guardians are young people with a great capacity for articulation, full of ideas and dreams, who live in a threatened territory. They understand the power of network communication and are already in this process of searching for knowledge. The School comes at a good time to enhance this learning process.

About the Guardians of Good Living collective

The Project of Agro-extractive Settlement of Gleba Lago Grande – PAE Lago Grande – is home to 154 communities and 6,600 indigenous and riverside families who work with extractivism and family-based agriculture.
The region is the stage of numerous territorial disputes, due to fishing, mining, deforestation, and mining pressure. 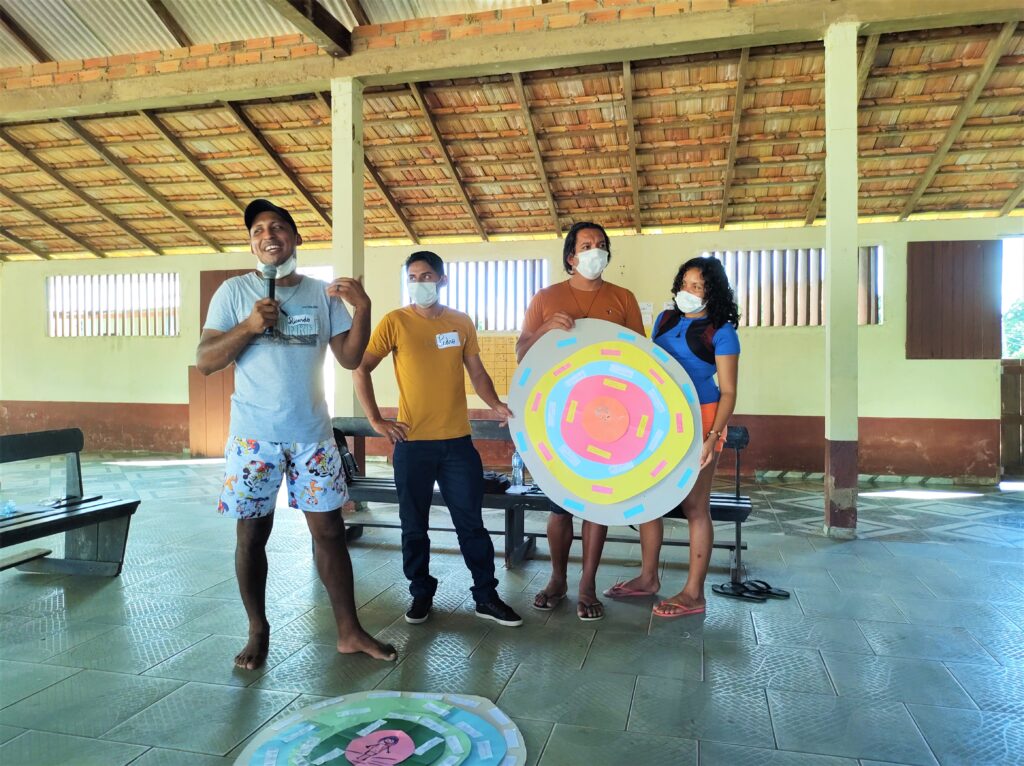 It was during the fight to defend the territory that the Guardians of Good Living collective emerged, formed by young people from the three areas of the settlement – Arapiuns, Arapixuna, and Lago Grande. “The Guardians emerged after a 37 km pilgrimage that was a form of struggle against the threat of mining, logging, and agribusiness that affect our region. Initially we were five young people from each area, then we tried to grow the collective. We are guardians of the forest”, says Erivelton Guimarães, one of the founders and coordinators of the collective.
The Guardians act in the mobilization of the residents, representing a branch of the Federation of Associations of Residents and Communities of the Gleba Lago Grande Agro-extractive Settlement (Feagle) – the highest representative body of the PAE communities. One of the actions of the collective is the dissemination, on social networks, of the Federation’s work, in addition to complaints from the territory about environmental crimes.
Pedro Soares, 31, guardian and resident of the community Vila Brasil was one of the students elected to represent the institution and participate in the classes of the School of Community Networks of the Amazon. For him, the trainings will help strengthen the collective: “for us to invest in communication, we need to understand how to get projects to benefit the community radios” – he explains.
The young members of the collective use a low-power community radio to communicate in the communities, but it does not reach the whole territory. One of the collective’s dreams is to acquire a radio that reaches the three regions through a high-power transmitter, said Karina Matos, 22, from Vila Curuai: “My expectation is to learn and interact with the territories. The lack of communication between the PAE areas causes damage to the region. Our work in the community radio helps a lot to inform our population and can improve even more”, she says.
The dream is shared by Gean Silva, 19, the third student at the school: “I hope that what we learn will strengthen us to defend our territory”. Besides the community radio, the collective has several other ideas for network communication actions, such as the creation of a website with stories from the region, training in design for social networks, development of projects for resource training, among others.
The three students from the Guardians will join 21 students from three states in the Amazon region (Acre, Amazonas and Pará) in the first class of the School of Community Networks in the Amazon. The classes will start in July 2022, based on thematic contents collectively designed to strengthen the networks involved.
The communities selected to participate in the training are: in Pará, the projects Ciência Cidadã in the Solimões Village and Guardiöes do Bem Viver in PAE Lago Grande – both in the municipality of Santarém – and the Rede Águas do Cuidar/ Casa Preta in the Caratateua Island, greater Belém. In the state of Amazonas, the Marajaí Village, municipality of Alvarães – Middle Solimões; the Formigueiro Group of Vila de Lindóia in Itacoatiara; and the Wayuri Network in São Gabriel da Cachoeira. In Acre, the Puyanawa Village in Mâncio Lima.