The workshop held in Vila de Lindoia, municipality of Itacoatiara in the State of Amazonas, Am-010, Km 182, bordering the Urubu River, brought together twelve participants associated with the Formigueiro Group from Vila de Lindóia, Sâo José, Colônia Nova Vida, São Geraldo, Rio Urubu, and Azafan. The region is the fifth of seven to host the team from the international formation program that, in Brazil, is led by the Projeto Saúde e Alegria

Based in the countryside of the Amazon, in Itacoatiara, near Manaus, the Grupo Formigueiro represents associations of traditional populations: riverine and indigenous peoples. It is located in an area with difficult access to the internet and cell phones, and stands out for having the biggest bonfire party in the state. The region’s economy revolves around tourism, tucunaré fishing, and family agriculture.

The communities are organized into 38 grassroots associations that make up the Formigueiro Group. The structure of political organization strengthens the struggle in defense of rights, of territories, and of the social control of the implementation of public policies, especially those for rural producers. The difficulty of communication is one of the great challenges of the group that aims to strengthen the local Communication Network for the defense of the territories and to spread its influential collaborative activities.

Formigueiro is one of the seven member organizations of the School of Community Networks in the Amazon, which hosted the project’s field actions from April 16th to 17th. Among veterans and young leaders, as well as the three students of the school, they bravely left their territories by river and dirt road to participate in the workshop with the objective of reflecting and dialoguing about the territory, mapping strengths, challenges, and dreams, as well as designing community communication strategies for the region.

The process was conducted by teachers Adriane Gama and Elis Lucien, accompanied by the local articulators of the Formigueiro Group, two digital culture activists who met in Lindóia: Tarcísio Ferreira, a partner of Coletivo Puraqué who currently works as a teacher in the Village; and Romário Elton, an activist from Ponto de Cultura A Bruxa tá solta, Rorainópolis – RR, who returned to his homeland to visit his mother and, upon learning about the strength of Formigueiro, decided to contribute to the Group. “Our thanks for the learning and generosity. The Formigueiro Polo V group and the other partner communities have only to thank” – emphasized the Amazon activist.

Tarcísio thanked the PSA team with the Formigueiro Group: “I immensely thank the people who participated in the activities because they came from very distant places. Most of the participants are not from the Village, they are from distant branches that went through quagmires, from the riverside, traveling more than an hour to arrive in Lindóia, in the middle of a holiday to participate in this workshop. This is due to the credibility that Grupo Formigueiro has with more than 30 communities and the credibility of PSA in bringing workshops here, in the countryside of the state of Amazonas, and also giving continuity to this collaborative process of knowledge”, evaluates the professor.

The workshop held in Vila de Lindóia brought together representatives of the Formigueiro communities that reflected on their challenges and potentialities of the territory, said Adriane Gama: “A great community communication network to be strengthened and reverberated in their work spaces in the region and to other networks. We were impressed with so many collective actions made by this group and by the representation of social actors that were participating in this special meeting of listening and many dialogues and reflections of a challenging Amazonian reality”. 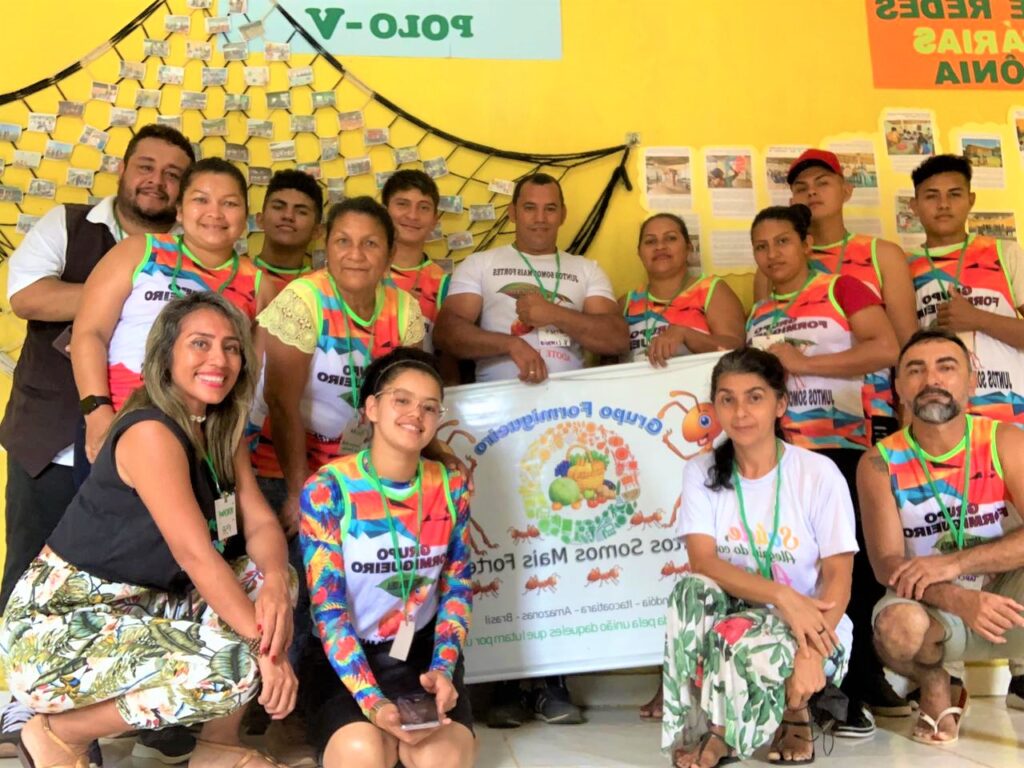 For Daiane Marques de Sousa, from the São José community, Colônia Nova Vida, one of the project’s students, participating in the training will expand the peoples’ participation in the community network: “It is a project that brings many benefits and knowledge for us to take back to our communities, and it is a pleasure to have the project here”.

Through the methodology used in the meeting, the participants were stimulated to reflect about their greatest needs, commented Gilson Castro: “I liked it very much. It was a great incentive for me. The dynamics were great. It is knowledge for my life and for our community”.

Based on the face-to-face meetings that will take place until the end of April in the seven participating communities, the board of the School of Community Networks of the Amazon will draw the curriculum of the training that takes place from July to December – seven specialists and seven leaders from each organization involved are part of the board.

Samira, Miquéias, and Daiane are the three young students nominated by Grupo Formigueiro, who will join 21 students from three states in the Amazon (Acre, Amazonas, and Pará) in the first class of the School of Community Networks in the Amazon. Classes will start in July 2022, based on thematic contents collectively designed to strengthen the networks involved.