April 7, 2022 / Education, Culture and Communication / Community Networks
The workshop held in São Gabriel da Cachoeira in the state of Amazonas brought together representatives of twenty-three indigenous peoples of the Upper Rio Negro. The region is one of the seven to take part in the international training program which, in Brazil, is led by the Health and Happiness Project.

The indigenous communities are currently organized into 90 grassroots associations which make up FOIRN. This structure of political organization of the Rio Negro Indigenous Peoples strengthens the struggle in defense of their rights, territories, and control of the implementation of public policies. This format of organization is responsible for the demarcation of 07 Indigenous Lands and the development of actions that contribute to the indigenous well-being in the Rio Negro.

The defense of the territory involves strong communication and articulation. In 2017, they created the Wayuri Network, composed of indigenous communicators who produce Wayuri audio bulletins, taking information about the indigenous territories of the Rio Negro to their 750 communities and acting as animators of events of the indigenous movement and mobilizers of actions aimed at improving the good living in their communities. The Wayuri Network has the advice of the Socio-environmental Institute (ISA) and the financial support of the European Union (EU).

The Network is one of the seven member organizations of the School of Community Networks of the Amazon in the period from April 1st to 2nd, and hosted the field actions of the project. Leaders, communicators and students of the school came to participate in the workshop with the objective of reflecting and exchanging ideas about the territory, mapping strengths, challenges and dreams of the indigenous people of Rio Negro. The process was conducted by Escola de Redes teachers Adriane Gama and Guilherme Gitahy de Figueiredo, accompanied by Gicely Ambrósio, coordinator of FOIRN’s communication department, and Ana Amélia Hamdan, ISA journalist.

“I really like the proposal of the School of Community Networks of the Amazon because it is not a closed project, created between four walls and taken to the people without any dialogue. It is an open project, which is being built collaboratively between professionals with relevant experience in community networks and the groups and networks of communicators from 7 different regions of the Amazon that chose students to participate in the first class” – said Guilherme Gitahy, professor at UEA and adviser to the School of Networks.

The workshop held in São Gabriel da Cachoeira with the Wayuri Network brought together different peoples and languages, pointing out challenges and potentialities of the territory, explained Adriane Gama: “Themes such as Article 231, 232, orality, radio, telephony, telecenter, indigenous university, self-sustainability, empowerment of women and youth, diversity of peoples, traditional medicine and fake news were part of the Mandalas of Knowledge proposed by them. The goal of this methodology was to encourage a mapping of themes according to their reality and from the strengthening of community communication networks, especially the indigenous Wayuri Network in the Amazon region,” says the researcher.

To the Coordinator of the Women’s Department of FOIRN, Larissa Duarte, there is a great expectation from the students to start the classes. For them, acquiring new knowledge for community communication represents the strengthening of the territory: “Having three young people representing the 23 indigenous peoples of the Alto Rio Negro strengthens our communication network, more training and knowledge in this area to help their relatives in our struggle” – she says. 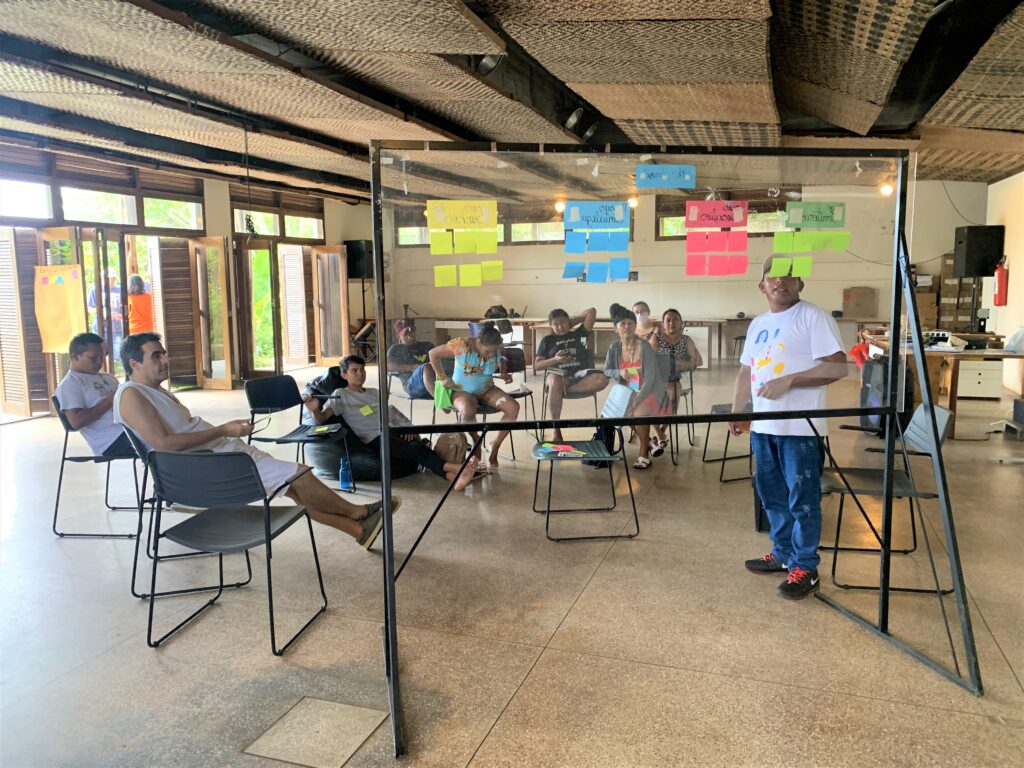 Through the methodology used in the meeting, the participants were encouraged to reflect on their greatest needs, said Erinelson Freitas of the Tukano ethnicity: “In this workshop we brought several thoughts, difficulties and challenges that we have in our community. This is important for all the people. My expectation of being part of the School is to help others to conquer their dreams”.

Based on the face-to-face meetings that will take place until the end of April in the seven participating communities, the board of the School of Community Networks in the Amazon will compose the curriculum of the training that takes place from July to December – seven specialists and seven leaders from each organization involved are part of the board. 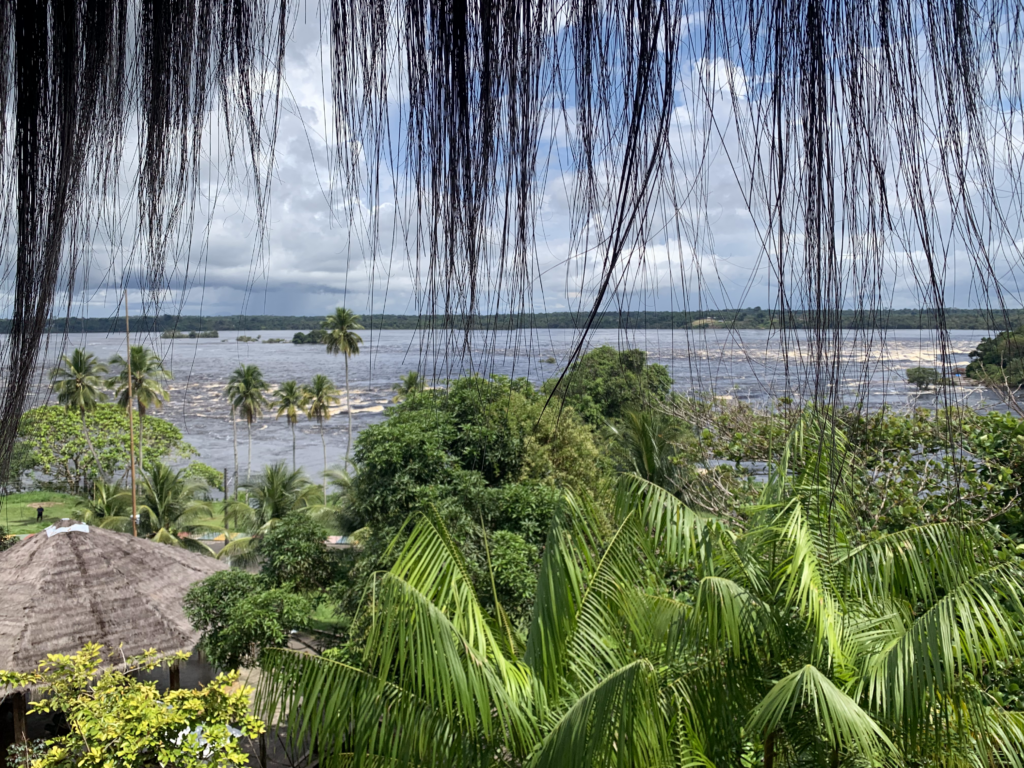 The three students nominated by the network will join 21 students from three states of the Legal Amazon (Acre, Amazonas and Pará) in the first class of the School of Community Networks of the Amazon. The classes will start in July 2022, based on thematic contents collectively designed to strengthen the networks involved.

“We would like to spread information about everything that we have been creating within the Waiury Network and to be able to share and bring information to grow our network” – Lara Martins, Tariana people, communicator and student representative of the Wayuri Network at the Escola de Redes.

“They really liked it and will take it to the others. The expectation of the three students is to start classes to deepen their understanding of the themes” – Gicely Ambrósio, Communication Coordinator of FOIRN.

“We have seen a lot of fake news. And we have the priority to alert our indigenous relatives who are in demarcated areas. It is a constant evolution.” Juliana Albuquerque, Baré people, communicator and speaker from the radio program Papo na Maloca.

“This shows that communication is important for us, the indigenous people of Rio Negro. To have three communicators who are part of this network integrating this great project is very rich for us because it will help us to have more learning and knowledge” – Claudia Ferraz, Wanano people, communicator of the Wayuri Network, producer of the Wayuri podcast and speaker of the Papo na Maloca radio program.

At the beginning of this meeting, there was also a very special participation of journalist Sonia Bridi, who came to this region to make a report for Fantástico, and taking advantage of this opportunity, she was invited by ISA’s communication sector to participate in a round of conversation on environmental journalism and her experiences of communication with the Wayuri Network.

When Sônia Bridi heard about the construction of the unprecedented School of Networks by Saúde e Alegria and community communication organizations in the northern region, she emphasized the support to the Project in the Amazon, highlighting that “the training of community communicators is essential, because the information that most transforms people’s lives is local, knowing what is happening in your community and in your surroundings, and secondly, because reliable information saves lives. Well-informed information is a tool for survival and quality of life,” points out the journalist.